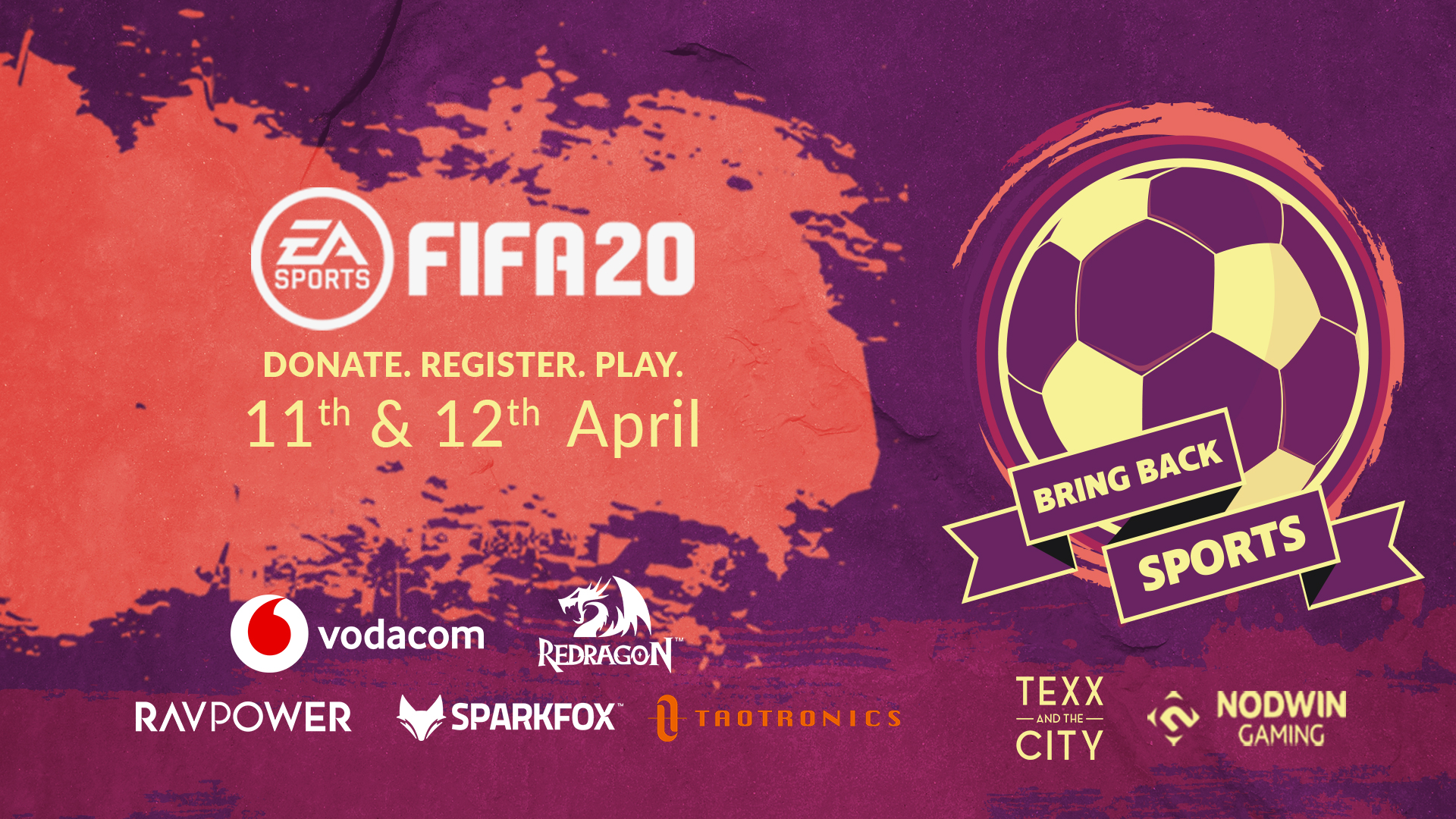 Amidst South Africa’s 21-day lockdown, Bring Back Sports aims to entertain, while supporting those financially impacted by COVID-19.

Rudy Gobert, a player for the NBA’s Utah Jazz, tested positive for COVID-19 and on March 11 one of the biggest sporting leagues in the world decided to suspend play indefinitely. The reality of the pandemic was setting in and leagues around the world had begun to panic. What followed was a wave of cancellation and suspension of sporting events that left fans with barely any live sports to watch – that’s if you consider WWE a sport at all.

With sporting leagues cancelled, and public movement restricted as a result of the lockdowns that many countries have imposed, the fix that fans get from seeing an attempted tackle on, say, Raheem Sterling is relinquished to a distant memory. Online gaming has seen a rise during these times. I mean, who can forget the walloping that Trevor Noah gave Cassper Nyovest during their live-streamed FIFA20 game? Twas a thing of beauty.

Enter Bring Back Sports. The brainchild of Glenn Kisela & Texx and the City, along with the backing of Nodwin Gaming, Bring Back Sports will shine a light on the power of gaming and esports whilst also giving back to the community that has supported its growth. Nodwin Gaming is already providing the public with ways to #StayAtHome with the Inkosi Super Cup, featuring four gaming titles to compete in.Bring Back Sports will feature tournaments for FIFA 20 and PUBG games, which will run over two weekends in April, May and June. The best part is that absolutely anyone can join. This includes musicians, pro players, shoutcasters, streamers, influencers and even members of the public. This is your chance to battle it out for the ultimate bragging rights.

FIFA 20 is an easy game to pick up and play, which makes it more accessible for more people to get involved. Also, with all major football leagues on hold, people are itching to watch their favourite stars get back on the pitch; even if it’s digitally.

PUBG was a no-brainer as it’s playable on mobile. This makes it incredibly accessible to anyone looking to get involved with gaming. It’s also a nice introduction to esports; something that is growing rapidly, both globally and in South Africa.

How can the public get involved?

The public can help support this tournament by paying a donation in the form of an entrance fee to participate in the tournament. The public will stand a chance to play with some of their favourite musicians, as well as battle against some of the top FIFA players in the country. There will also be prizes up for grabs and more, so stay tuned to find out exactly how to get involved.

Proceeds generated from Bring Back Sports will go directly towards the Solidarity Fund set up by the government for COVID-19 relief efforts. In addition, a relief fund will be set up to assist those in the music industry who have been hit the hardest, with donations raised during the tournament through our unique BUSQR code.

The registration links for the FIFA 20 tournament this weekend is live. Players are asked to donate to the Solidarity Fund via the Backabuddy link & write a message with #BringBackSports2020 so we can track the donations.

The FIFA 20 tournament will be played on both Xbox and PS. You’ll stand a chance to play against some of the best in the country or battle your favourite music artist.

We’re going live with FIFA this weekend. Next weekend we continue with FIFA & then will also be launching our PUBG Mobile weekend tournament.

There are also great hampers to be won by those participating in #BringBackSports2020. From viewers to players themselves, anyone can have a good time and potentially walk away with a prize. Lockdown may have been extended but that doesn’t mean we can’t still have fun.