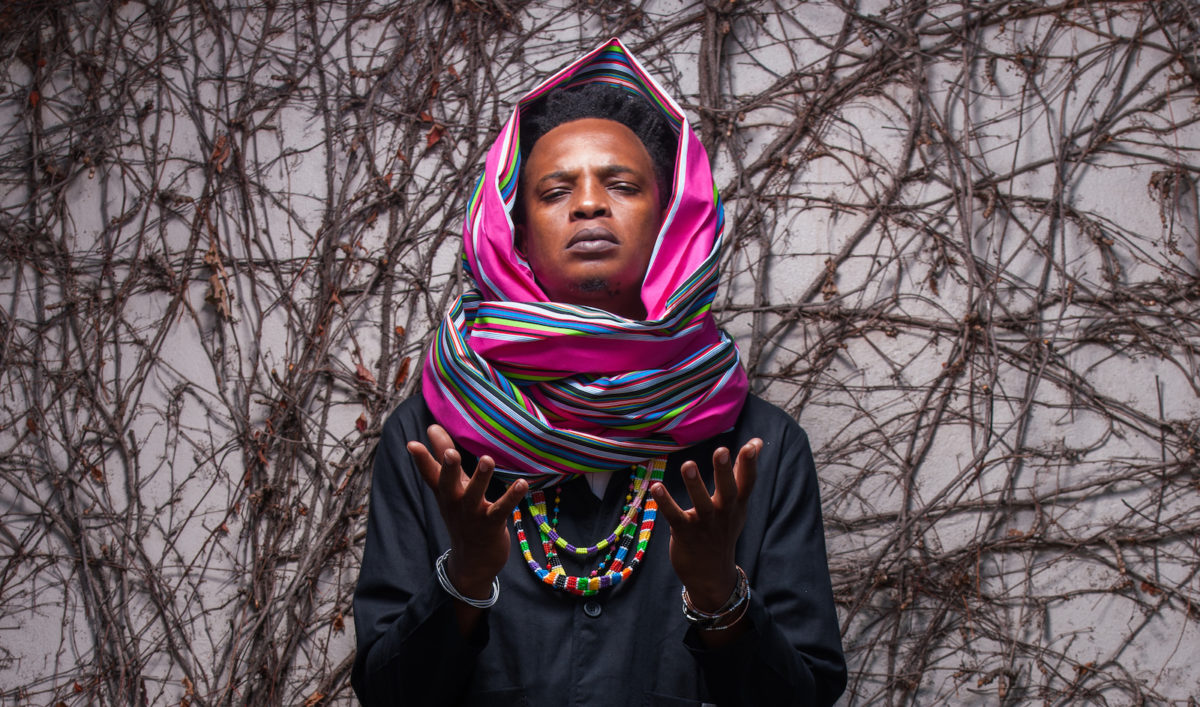 In conversation with pH Raw X

With the recent release of his sophomore album, SENSE EXPERIENCE & EKEYOTO, pH Raw X asserts himself as one of the most exciting and innovative acts in the South African music industry.

Through commendable self-awareness, resolve and commitment, pH Raw X has managed to become a mainstay in the game, wearing many hats, as a high calibre producer, rapper and singer. He has worked with a host of incredible artists, ranging from Khuli Chana, Thandiswa Mazwai, AKA, Sho Madjozi, ProVerb and Kabomo, mostly as a producer, while occasionally lending his vocals on their respective collaborations. With a career span of over a decade, he has now made a serious foray into solo work and is on the cusp of establishing himself as a household name. We sat down with him to discuss his beginnings, his journey so far, his legacy and he shared some insight on what he believes it takes to have staying power in the industry.

THE PLUG: When did you get your start in the music business, and how were those early years while you were making a name for yourself?

pH Raw X: Professionally, I think it was 2008. That’s when I produced my first official song for Zubz. I had been making beats since 2005 though, working with the likes of Ootz The Afronaut and Nick GreenHouse, who has since passed on – may he rest in peace. Those early years were so real and full of energy. We had no clue how far or how things were about to change in the next couple of years. We just did what we loved. We were aware that as far as the music industry is concerned, we were at the bottom of the food chain but that didn’t deter us. What’s important is that we were all trying to make a name for ourselves. This translated to less ego clashing but high confidence amongst us. I am incredibly proud to have been part of those beginnings and this current situation.

How did you come up with your name pH Raw X? Does it mean anything? Especially the way it’s stylized with the lower case p, upper case H and X.

My English name is Gift, which means “Mpho”, “Sipho” and “Simphiwe”, which, incidentally, are all South African ethnic names with the letters “p” and “h” as the common denominator in them. Now, in high school I spelled my name as “Gipht”, still pronounced “Gift”. People started calling me “Gipht with the “p.h” at first, and then eventually, they just started calling me “p.h”. The second part of my name, “Raw X” is in reference to me owning a production company called Raw X, where I do all my work. The lower case “p”, in “pH” is a nod to Chemistry, you know, the measure of the acidity (and alkalinity) of a solution. That’s why it’s stylized that way.

Amongst the albums and artists that you have worked with, which would you say are the projects you are most proud to have been involved?

I’ve worked with a wide array of artists at different points of their careers. It’s hard to choose but since you ask, I would say Motswakoriginator and Lost In Time, both by Khuli Chana, Alter Ego by AKA, A Reece’s earliest project, Browniez EP, Skhanda Republic by K.O., From Giyani with Love by pH Raw X as well as the most recent, Limpopo Champions League by Sho Madjozi.

Was it always your long-term plan to get into the game as a producer first, and then branch out to being an artist in your own right, rapping and singing? How did that all happen?

Yes. That has always been the plan. Before I understood production and beat making, what I truly wanted to do was to rap, like everyone else. I quickly realized that my skill, as a rapper, was not up to par with most of the rappers around me, so I decided to do something that would make me special. I wanted to set myself apart. I believed that being able to rap and produce would help me achieve that. I’ll tell you a little story. The song “Chilling” on Khuli Chana’s Lost In Time, which features myself and Ma E, was actually meant to be my first single after Khuli released “Tswa Daar”, which I produced. In hindsight, I wish Khuli did more with that song, you know, pushing it as a single and such, because it was hard for me to let it go.

Who are some of your biggest music influences? Local and abroad. In production, rapping and singing. Do you see yourself as a rapper that produces or a producer that raps?

I see myself as a music artist and creator. To me, this means I can be any of those titles at any time that I choose to practice. So, that producer question doesn’t make much sense to me. When it comes to music in general, my influences vary. From a production point of view, I draw influence and inspiration from Quincy Jones, Dr Dre, Kanye West, Sello Chicco Twala, Amu, Ootz, J Dilla, Nyambz and Battlekat. From a singing point of view, it’s Boys II Men, Kid Cudi and Bob Marley, and when it comes to rappers, I like Tupac and The Lost Boyz. Mr Cheeks is my favourite rapper.

You have collaborated with a wide variety of artists and musicians. Why is collaboration such an important part of your arsenal, and how are you able to have what seems to be such good relationships with your numerous collaborators? (The energy in your music videos with ProVerb, Kabomo, Thandiswa Mazwai, Sho Madjozi etc. is quite palpable.)

I always let the music lead the relationship. I respect every musician I work with, and they always bring something that I cannot. I feel that is the point of a collaboration. For example, if a collabo works like how a band does, you cannot have three drummers and two bass players. You need to make sure each member brings something different from the other. This also allows each party to shine without competing. This is how I approach collaborations.

You recently spoke, on your IG Live, about losing the Raw X Studios. How did that happen and what is the status quo?

I lost it because of financial issues. The usual stuff, you know, having to pay my bills and helping out, financially, back at home. We back up and running at a new space though, which is a much better place, even though I will always miss the old premises where we had Raw X. We created lots of magic there.

How would you say you have managed to evolve in the industry where producers are a dime a dozen now?

By always being a student of the game, meaning one needs to be intently involved as much as possible. I remember going to Slaghuis being a religious thing for me. Me and my guys, we drove from Fourways to Diepkloof like it was nothing – just to be there and feel the vibe. So, I believe that one always has to be part of the vibe, whether it suits your style or not. I’ve found that it influences change and encourages improvement. I also reach out a lot. I don’t wait for artists to hit me up. That resourcefulness and keen eye to initiate work has given my career legs. And ultimately, make good music, man. That’s the one undeniable characteristic. Make good music because people always see past the b.s.

Can you explain the journeys and what went into making From Giyani With Love, The Break, Thank God and the progression to SENSE EXPERIENCE & EKEYOTO. What has each project meant for you at the time you made it and where you are now?

From Giyani With Love was my first offering as a performer. It is very special to me. Every project I released between then and SENSE EXPERIENCE & EKEYOTO, I took as training or school. You know, like in the Van Damme film, right – Blood Sport, there’s that time when Van Damme goes to see the Sensei, before coming back to fuck everything up. SENSE EXPERIENCE & EKEYOTO is that part of the film for me. This is the beginning of me fucking everything up as an artist and producer. I don’t remember the exact time I spent but I was in studio every day during the period I made it. I even have an unreleased album titled Roxanne, which is by far my most conceptual project. I recorded and completed it in 2017 before I began work on SENSE EXPERIENCE & EKEYOTO. I’m currently finalizing another album I started in 2020 titled Full Circle.

That is incredible work ethic. Were you independent before you released SENSE EXPERIENCE & EKEYOTO? And with Warner Music, are you signed to them as their artist completely or is it a publishing or distribution deal?

I was signed to Universal when I released From Giyani With Love. That situation, unfortunately, didn’t work out too well. I have since partnered with Warner Music on a licensing deal. I’m not signed to them as an artist with a 360 deal. I own my publishing and masters (I know that has become a trendy topic lately).

What was your vision for SENSE EXPERIENCE & EKEYOTO? Are you happy with its reception so far?

My vision was to do the most with it visually and bringing it live on stage. This album is the beginning of the rest of my career as a performing artist. I love the reception so far, people are seeing it for exactly what it is – a piece of art and a breath of fresh air. It is a well-put together album, not a compilation of songs. I believe that it’s a great album that will certainly stand the test of time.

You tweeted that you’d be introducing a new artist in the next two weeks and that you’re adding the final touches to the project. Do you mind speaking on that?

Her name is Khan Khalii. She’s an alternative R&B artist. I’ve just completed her EP that will be called Pitsville – Lost In The Trap. I’m very excited about her.

My relationship with A Reece is very good. I produced his first EP, Browniez. I actually just spoke to him a couple days ago, regarding the album infringement, in the wake of someone putting out a fake album using his name. And yes, my legacy is through people, so I’ll always be doing my part to introduce new artists.