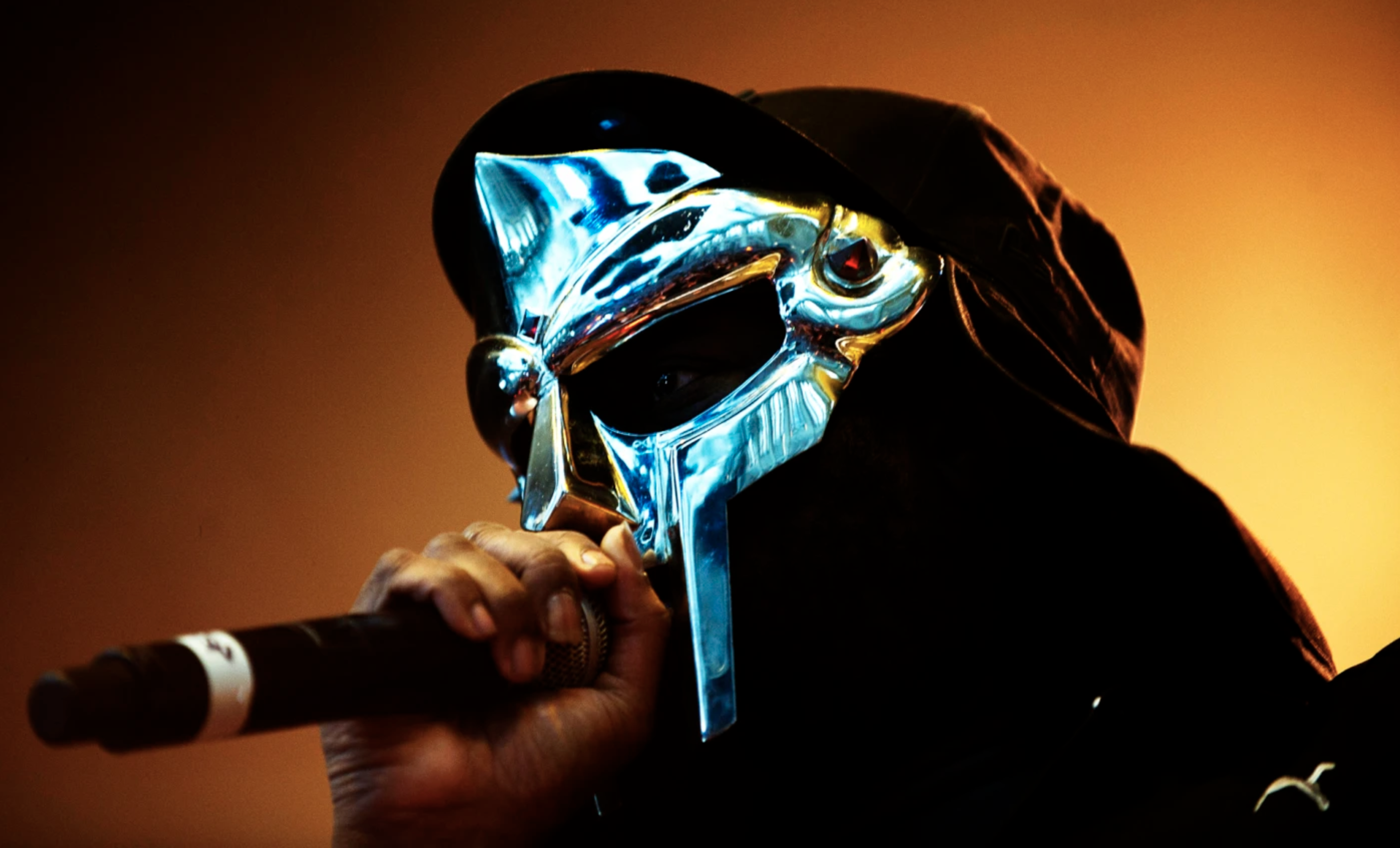 The hip hop community stepped into the new year on a sombre note. On December 31st, 2020, just as the clock struck midnight – South African Standard Time, our collective Twitter timelines were inundated with news that broke a few minutes prior – MF DOOM had passed. It would later become apparent that MF DOOM actually died on October 31st, 2020. Only,  his wife Jasmine, revealed the news of his death two months later, on December 31st. A rather befitting sequence of events, even in death – considering how private and mysterious MF DOOM was when alive.

DOOM has graced the shores of South Africa with his presence. One of the fastest-selling editions of the Cape Town Jazz Festival happened in 2013. Amongst the headliners that year was the Robert Glasper Experiment, who would be joined by MF DOOM for their set. After the festival, DOOM briefly caught up with South African writer Mpho Moshe Matheolane and in the conversation they had, an interesting piece of dialogue jumped out. After Motheolane told DOOM about South African Jazz artist Zim Ngqawana and his use of Xhosa in his music, a jubilant  DOOM responded, “Xhosa! That’s my father’s language. That’s his lineage right there, from Zimbabwe, yeah. I should put you in touch with my father. He’d be the person to talk to because he knows more about where we come from than me.”

MF DOOM’s real name is Daniel Dumile. He was born in London, United Kingdom on 9 January 1971, to a Trinidadian mother and a Zimbabwean father. He moved to New York at a very young age and even though he never renounced his British citizenship, he has said on numerous occasions that he didn’t remember much of his time in the United Kingdom. As such, he lived much of his life as an American, despite never obtaining American citizenship either.

He formed a group with his brother, Dingilizwe, who performed under the moniker DJ Subroc. Their group was called KMD (which initially meant Kausin’ Much Damage, but was later changed to mean Kause in a Much Damaged Society). KMD landed a record deal with Elektra Records, releasing their 1991 debut LP, Mr Hood. They were in the mould of the Native Tongues (think early Brand Nubian and De La Soul) with afrocentric and politically charged lyrics and themes. Starting off with three members, along with Onyx the Birthstone Kid, the group became a duo of just the Dumile brothers. They carried on work on their sophomore LP, Black Bastards. The LP was substantially different from their debut as it was more aggressive and presented a much more grown and darker side of the duo.

Unfortunately, leading up to the finalisation of the album in 1993, DJ Subroc met his untimely death. He was struck by a car and died while crossing the Long Island Expressway. Devastating as this was to Zev Love X, he had to wrap up the album and submit it to the record label without his dear brother. As if that wasn’t bad enough, the label had issues with the content of the album, but more so, they had major issues with the album cover – which had a depiction of a Sambo character hanging by a noose. They flat out refused to release the album and instead offered Zev Love X a flat fee and his masters back, effectively dropping him off the label.

With his brother now dead and without a record deal, Daniel Dumile was almost homeless, sleeping on park benches in New York. He then moved to Atlanta, Georgia where he simply retreated from the public eye, leading a civilian life and raising his son. Zev Love X was never heard from again.

Dumile resurfaced in the mid to late 90s, making music under a new alias and a completely different persona, MF DOOM – which is inspired by the Marvel Comics supervillain character, Doctor Doom. He found resonance with this character as he saw himself as a villain who was casted out by the industry. Now, he donned a metal mask that became a signature and more of a symbol and rarely appeared in public without it. A revamped and reinvigorated DOOM went on to release a handful of singles before he released his debut solo LP, Operation Doomsday in 1999.

Operation Doomsday served as a kickstarter to a cultish career that saw Dumile have a second act, rebranding as a highly skilled emcee whose songs were mostly a hookless tapestry of dense wordplay, obscure comic tit-bits and soulful samples, establishing him as one of rap’s foremost revered visionary auteurs. Incidentally, he has described himself as a writer, creator and director – in reference to how he would sometimes have other people don the metal face and portray him at concerts.

Towards the turn of the new millennium, hip hop had seen many eras pass – from the gangsta personas, the east coast vs west coast, to the shiny suit era. The underground was underscored by Rawkus Records who had a great run, debuting careers of acts such as Mos Def and Talib Kweli, as well as housing talents such as Company Flow. It is during this time that MF DOOM would enjoy a self-created niche somewhere in between all these lanes. This saw him go on an uninterrupted streak of releasing mind bending, classic projects under various aliases, all connected to his central persona.

He released Take Me to Your Leader in 2003 as King Geedorah – an alias he got from one of the monsters in the Godzilla films. Vaudeville Villain was released in 2003 as well and this one he released under the moniker Viktor Vaughn – which is a nod to Doctor Doom’s real name in the Marvel Comics. Venomous Villain followed in 2004, once again as Viktor Vaughn. Mm..Food was also released in 2004 and was simply an anagram of MF DOOM. The aforementioned were produced predominantly by him.

DOOM quickly gained a cult following, becoming the poster child for the eccentric, left of centre side of hip hop. Here was a supremely talented emcee who was clearly dextrous and sophisticated enough but seemingly uninterested in hip hop’s obsession with the typical gangsta inspired façades. Instead, his obsession lay in comic books. Not since RZA’s obsession with kung fu films that populated the Wu-Tang Clan’s music had an emcee exhibited such a nerdish fixation on any phenomenon other than rap. With his muddy flow, he bordered on obscurity through his muddled thought process which resulted in unconventional songs that often had no hooks and were mostly under 3 minutes. But there was no denying the genius that held together his prose.

The metal mask also added an interesting dimension to him. A symbol of rebellion, during an interview at the Red Bull Music Academy Madrid in 2011, he explained the messaging of the mask and said, “Imma come with the angle of, it don’t matter what I look I like, you know, it don’t matter what the artist look like, it’s more what the artist sounds like. So, the mask really represents the, the whole, like, to rebel against the trying to sell the product as a human being, you know what I mean, it’s more of a sound… and at the same time, it’s something different… and it fits with the theme of the rebel, the villain, where you know, to him he don’t care about the fame… that’s of no consequence. It’s more of the message and what’s being said. I think it helps people focus on what’s being said.”

But even still, on a deeper, philosophical level, the mask could also represent the pain of losing a close and dear brother, losing what seemed at the time to be a livelihood and then being thrown into the throes of abject poverty. In the Marvel Comics, Doctor Doom puts on a mask after an experiment of his own goes horribly wrong resulting with his face being burned in the aftermath. Dumile may have not been hiding his face because of a hideous injury to his face, but of all that crashed and burned in his previous life. A part of him was lost in the fire when his brother died.

DOOM went on to release his most impactful and commercially successful project in 2004. A collaboration album with LA producer Madlib (as Madvillian) called Madvilliany. This is the album that cemented MF DOOM as a juggernaut in hip hop, and to a large extent, Madlib – both artists became crown jewels in the underground and independent scene. Characterised by Madlib’s sample-based production – looped and chopped from jazz and soul records – which provided the perfected canvas for DOOM’s ruminations. Madlib went on to enjoy many partnerships with various emcees and producers on projects, and one would be remiss if they don’t cite Madvilliany as the genesis of Madlib’s prolific collaborative knack. Madvillian was the precursor to Freddie Gibbs’ current run with Madlib. The following year, Doom collaborated with Danger Mouse and together they released the critically acclaimed The Mouse and The Mask as Danger Doom.

Through his numerous collaborations, DOOM managed to tap into other realms and he did all of this without compromising himself. Despite his mysticism and mystique, he remained a highly sought after artist and practitioner, revered and respected in equal amounts. As complex and different as he was, he was accessible, interesting and interested, this is why he could interpolate Sade, collaborate with Ghostface as DoomStarks, perform at Jazz Festivals – all the while being his true self.

Interestingly, on an episode of Slikouronlife’s Rhymes and Reason with Reason, K.O. was a guest and when listing his influences he mentioned, amongst others, Company Flow and MF DOOM – understandably Reason was surprised. He didn’t think K.O. listened to MF DOOM. One could go as far as saying without Metal Face Doom, we wouldn’t have the DJ Sbu/Mzekezeke dichotomy. That’s one of the many attributes DOOM will be remembered for – he touched so many at different times and in different worlds. He fell, he rose and now he is rested.

“On Doomsday—ever since the womb, till I’m back where my brother went / That’s what my tomb will say.”