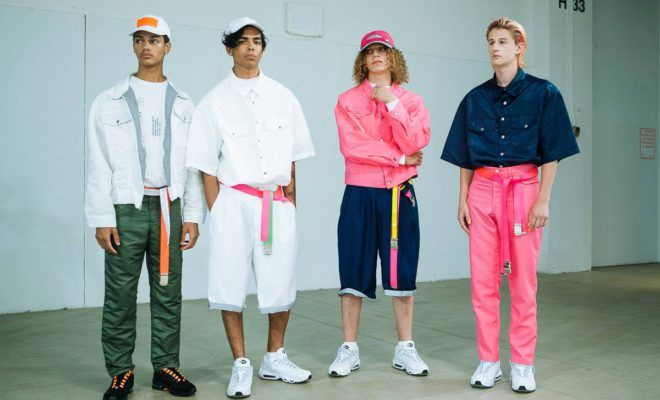 Fashion is like a pendulum swing, trends come and go and come back around again. Brands that were but a distant memory have been resurrected and got us heading to thrift stores to find old gems or rummaging through our Dad’s closet hoping to find that classic Champion hoodie or FILA jacket. Below you’ll find trends in streetwear that exhibit the revival of retro and sub-cultural influences that have prevailed in the backstreets of New York, London and Berlin, adorned by the ultra cool and style influencers of streetwear.

We’ve seen many a styles of belts over the years (think studded and boho big buckle belts circa early 2000s.) However, a new trend on the block has surfaced – extra long belts. Off-White’s “Industrial Belt” has unsurprisingly penetrated the streetwear scene that has seen style influencers such as Asap Rocky and Luka Sabbat sporting the accessory. Once worn purely for functionality, this new trend is a reiteration that fashion doesn’t always have to be practical.

Made popular by streetwear bellwether Vetements, the brand introduced oversized hoodies and shirts with elongated sleeves. The exaggerated sleeves give off a slouchy indolent vibe. The style is impractical to say the least but in the effort to look cool, who cares?

Keeping within the “its-so-bad-its-good” theme that streetwear seems to be adopting; gaudy, clunky and bolder sneakers are the coolest trend filling our instagram timelines. The Yeezy Runners, Raf Simon’s Ozweego 2s and Balenciaga’s Triple S sneakers catapulted the resurgence of this 90s trend.

As previously mentioned, we’ve seen an increase in sub-cultural influences within streetwear. At the forefront of this phenomenon is the 90s underground techno rave wave that the cool kids in New York are riding. Think goggle glasses, raver pants and gothic boots. The collaboration between Gosha Rubchinskiy and Super Glasses introduced a collection of raver shades in an array of colourways which Asap Rocky and Asap Ferg were spotted rocking.

Staying on trend with 90s fashion, puffer jackets and coats made a come back in a big way and the fad doesn’t seem to be slowing down, a cozy staple for the colder months to keep you warm and on trend. Formerly serving as a staple meant for the ski slopes, puffer jackets have glided into the trendy arena. The collaborative offering between Supreme and Northface included leopard print and slogan puffers while Vetements and Balenciaga went the classic route. There are an array of styles for every preference – from a more shrunken style or shorter length to the classic bulky over the knee style. Take it one step further by tying a belt to give definition to your waist.

From quirky slogans and band T-shirts to the Gucci vintage logo tee- graphic tees have been pervasive for the past couple of seasons and the trend doesn’t seem to be slowing down. Pair a graphic tee with a pair of jeans and heel boots or go for an effortless cozy look with track pants and sneakers.

Workwear and industrial style ensembles are dominating the streetwear scene, resulting in heritage workwear brands like Dickies and Carhartt being pulled out of the abyss. Following in the anti-fashion theme that has been prevalent in recent seasons, streetwear is moving towards pieces that have no correlation to fashion, ushered in by Streetwear Head Master himself, Demna Gvasalia. It all started when Vetements introduced a DHL tee down the runway that had the industry in a frenzy. Some were confused, some thought it was brilliant, either way it became an aesthetic that most wanted in on. Fast forward and streetwear brands are eating up this trend. An atypical pairing, Heron Preston collaborated with the New York Department of Sanitation to design reworked uniforms including vests, hoodies, pants and gloves. A trend inspired by labourers and service workers, the workwear trend introduced an unwonted and novel vibe to the streetwear scene.

Made popular by Vetements, uneven raw edged hems adds a cool edge to your pair of jeans. The brand released a step hem style which was short in the front and long at the back. Since then, the trend has trickled down and brands have jumped on the bandwagon creating different variations of this disheveled but intentional cool look.

Fanny packs have gotten a bad wrap over the years for being an uncool tourist staple. You know, the sort of thing your mom wore purely for practicality, farthest from a fashion statement. Well, not anymore. Fanny packs have been resuscitated and become a cool accessory with the help of streetwear brands. The style has since reinvented itself and the gatekeepers of cool are now wearing them side ways as apposed to around the waist.

Sportswear seems to revive itself every season. We’ve seen an influx of sportswear brands such as Kappa, Umbro, Champion and FILA making a comeback and its all thanks to fashion’s mutinous brandsv- Off White, Vetements and Gosha Rubchinskiy. A saving grace for these fallen brands as it has put them at the forefront of streetwear. Gosha Rubchinskiy kickstarted this trend with his collaborations with FILA, Kappa and Champion and more recently, teamed up with Adidas to introduce a post-Soviet inspired collection and has recently collaborated with Adidas following the 2018 World Cup which is to be held in Russia.