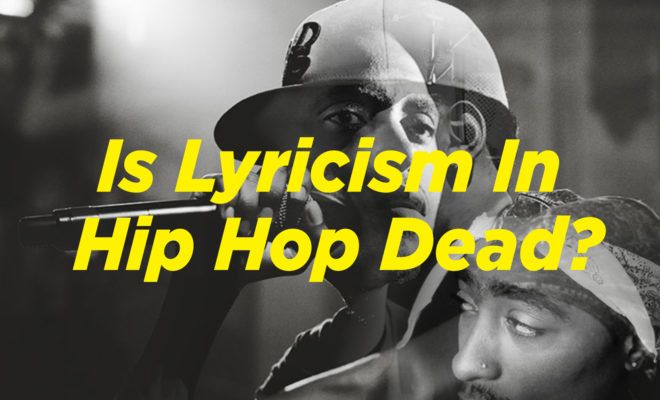 How many purists may characterize lyricism in hip hop is through a template that insists on overt complexity, density and the multi-layering of thought. However, Hip hop has sought to provide space for anyone capable of finding a particular eloquence in interpreting its unique vernacular.

It is important to first make the discernment that music, much like any other form of art production, is defined by its ability to communicate, and in a world where a plethora of fast and fleeting micro-communications are constantly taking place, feeling has consolidated the clutter often created by words. There is no struggle being waged between the lyrical and non-lyrical (if such a thing exists), but instead what we are seeing is the evolution and an adaption of a craft to best suit the circumstances and preoccupations of the time.

In lieu of records such as Jay’s 4:44 and Kendrick’s DAMN, it has become clear that even artists who, traditionally have been known for the complex density of their work, have seen need to refine, and present lyrics with a certain directness.

This evolution has been influenced by a number of factors, namely, mass art production that has resulted in deskilling and the democratization of art practices and secondly, the internet and its disruption of social orders and behaviors around social communication.  Artists have not become less complex or less lyrical, instead, our collective thinking and generational dialect has been influenced by the overwhelming presence of semiotics in the world around us and as a result, has veered us closer towards a world of irony and cynicism. We think and speak with the same directness of memes and emoji’s and so does our music.

Analyzed at face value, this statement may seem like a declaration, pronouncing an end to thoughtfulness and the rise of the philistine, on the contrary. My assertion is, in fact, derived from the idea that communication exists on a scale that moves from complex to simple, with simple being the highest and most effective form of communication. The artist is tasked with work of having to toil with this formless mass of worldly complexity, eventually sculpting it into something concise that remains nuanced and texturized by the same complexity that informs it. This logic has been useful to most commercial spaces and as hip hop continues its ascension to the heights of commerciality, it is no surprise that this same process of refining has resulted in the reimagining of lyrics in the genre.

Despite its counter cultural attitude and approach, hip hop, specifically in the 90’s and the early 2000’s, had, through the label system, become extremely formulaic and structured for radio. It’s important to cite the restructuring of the music business as a key contributor to how hip-hop music sounds today. What was once an elongated process that involved budgets, artist development, lengthy recording processes and mass marketing drives, has now been reduced to a session in a bedroom studio and an internet link. There are no bureaucratic check points or insights from seasoned producers, the immediacy of this process in many ways accounts for the experimental and lucid nature of the music and its lyricism.

Furthermore, the stratification between the current state of hip hop and that of previous eras, cannot be solely attributed to the above mentioned factors, it is also the spawn of a rigid and hyper masculine fraternity – a sum of the father’s sins. There is no pathogenesis or sudden departure from the traditional terms of engagement, years of disingenuous sentiment, tough talking and over compensating has lead us to right now. And right now isn’t bad. In fact, it is as fluid and motional as it has ever been. The rigidity of previous eras has indirectly ushered in a generation preoccupied with feeling, movement and the evasion of apathy.

Founded as an avant-garde movement, hip hop has since settled into its new position as the vanguard of popular culture. And much like any other genre that developed from a small sub-cultural group and gained widespread notoriety, it will begin to rebel against itself, as a means of making new meaning.

The greatest issue with this conversation around lyricism is one of epistemology. It is impossible that an art form created in conversation with the politics, the environment, the culture and aspirations of 1980’s New York City, would produce an exact rendering of itself anywhere else in the world. There are numerous iterations of rap music, where the lyric is present yet operating in its own distinctive way. To dismiss these methods, would be to inadvertently dismiss the thought systems that created them. From the southern drawl that allows for the use less verbose rhyme patterns, to the percussive lead that renders lyrics secondary to rhythm and beat, in African music, the thought systems used to create hip hop in one region of the world may be vastly varied in a different part of the world, but lyricism is a constant in hip hop.

Lyricism, as per the Oxford dictionary: An artist’s expression of emotion in an imaginative and beautiful way; the quality of being lyrical.

By this definition, hip hop has become more lyrical than ever before. The vastness of expression and imagination has developed beyond the bounds and constraints of convention. Much like the artists of previous generations, contemporary hip-hop artists have aptly responded to the state of their social environment, with music and lyrics that reveal a lot about the human condition. The world is as indulgent, violent, excessively drugged up, distracted and materialistic as hip hop currently suggests. And perhaps the reluctance to accept this depiction as a lyrical rendering of the time, has more to do with our own reluctance to accept these ideas as facts of our current existence.