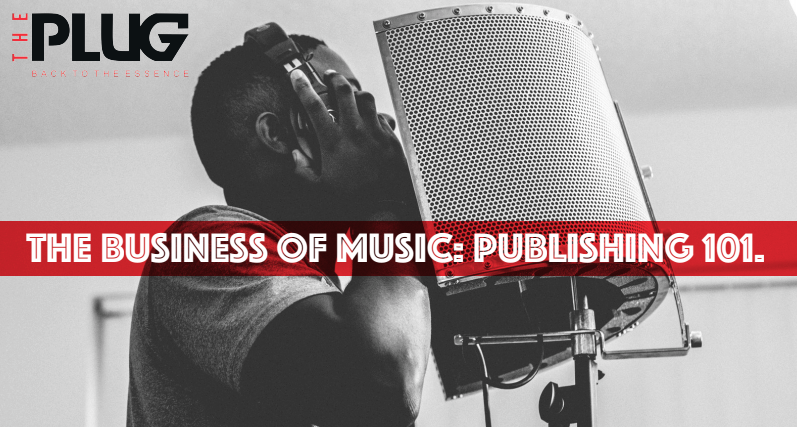 The Business of Music – Publishing 101

In early April 2018, a prominent Sunday newspaper ran a story with the headline “Gospel shocker: How black musicians got screwed”. The story purported to be an exposé on a ‘royalty pay-out scam’ involving gospel star Hlengiwe Mhlaba and the Southern African Music Rights Organisation, also known as SAMRO. While it created an uproar amongst the general public, one of the takeaways from the article was the disconnect that many artists have with the business side of their music careers and the knowledge  on how to fully capitalise on certain aspects of it.

While music publishing and copyright can be a bit complex, our aim is to simplify some of the concepts to give artists and content creators a fair understanding of the rights attached to their work.

What are publishing rights?

As an artist, one of the streams of income generated from your music is that of royalties from publishing rights. Simply put, music publishing rights are the umbrella of rights associated with the copyright of a musical composition. With a recorded musical work, what needs to be understood is there is a “composition” and the “sound recording” of a composition. The composition is the written song, and the sound recording is the recorded version of the written song that is made available for sale. There are different rights attached to the two aspects of the work. The rights to a composition are owned by the author or composer of the work, whereas the rights to the sound recording (also known as the master) are owned by the performer or the record label. 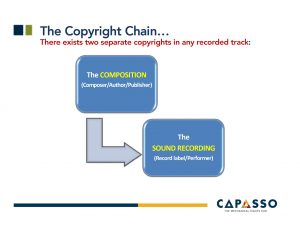 If you were to do a cover of John Lennon’s Imagine, you (or your label) would own the master rights to the recording of the song but would not own the publishing rights as you did not write the lyrics to the song or compose the music in the song. The royalties for the composition would go to John Lennon. In owning the master rights, you would be liable for the revenue from the sales of the recording and the royalties for the recording. 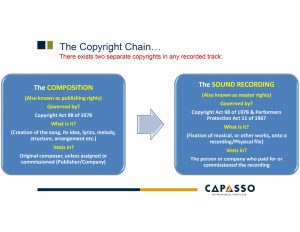 Who owns the different rights?

The Copyright Act 98 of 1978 states “the ownership of any copyright conferred by section 3 or 4 on any work shall vest in the author or, in the case of a work of joint authorship, in the co-authors of the work.” It defines an author in relation to “a literary, musical or artistic work, means the person who first makes or creates the work” and in relation to “a sound recording, means the person by whom the arrangements for the making of the sound recording were made.” Simply put, the person who wrote the music or lyrics to a composition owns the rights to that composition and the person who arranged for the recording of the sound, owns the master rights to the sound recording. If the arrangements were made by the record label that an artist is signed to, the record label owns the master rights to the recording.

What happens when more than one person wrote the work?

Typically, the different people who collaborated on a musical work should fill out a split-sheet. A split-sheet identifies the different parties that co-authored a musical work and in what percentage they contributed to the writing of the song. There should be a documented split-sheet per track and it should have as much information on it as possible relating to that particular track viz. the track title, the date(s) recorded, the studio used, the record label it would be released under, the authors and their percentage splits, and the signatures of all involved parties. A copy of the split-sheet should be taken by every collaborator, should a claim arise, as proof of their contribution to the musical work.

An important note to make is that publishing rights accrue to writers or composers. If, for example, a DJ wants a song made and commissions another artist to compose the melody (or the beat, from a beatmaker) and commissions a songwriter to author the lyrics and sing on the track, the publishing income would accrue to the authors of the melody and lyrics. The DJ would own the master rights as they made the organisation/payment/arrangement to record the song, but not the publishing rights as he was not an author, unless the publishing rights were signed over to him in writing. Unless he edits the composition/beat in a way as to create a sufficiently creative way to differentiate it from the original beat, only then will he be recognised as an arranger of the composition and a portion of the publishing income would accrue to him. If he only made payment or organised for the recording of the song, then only the master rights would accrue to him.

What are the different rights attached to a musical work? 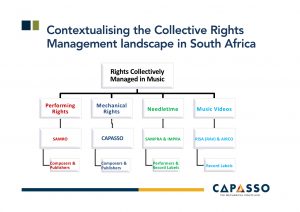 The owners of a copyright of a musical work own the exclusive rights to perform, or to authorise others to perform, their work publicly. When the user either performs the work publicly, or it is broadcast on a public medium such as TV or radio, a royalty is accrued. SAMRO is the rights organisation that administers performance rights in SA. 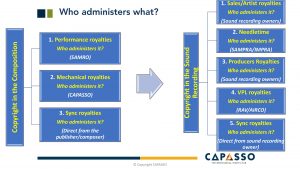 What are collective rights agencies and what do they do?

Typically, SAMRO will negotiate a blanket fee for the year from a broadcaster, like the SABC, to make use of their catalogue. A broadcaster will routinely send SAMRO details of the music played for the period, SAMRO – after making the necessary deductions for their admin expenses, social and cultural allocations, and income tax – will distribute the royalty payment out to rights holders based on the total seconds played by the distribution channel.

The royalty payment will be made to the different rights holders in the percentages illustrated below. 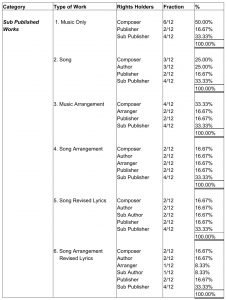 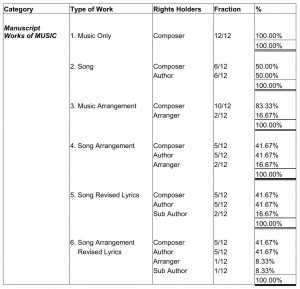 What happens to royalties that are not claimed?

Royalty distributions that are not claimed can be claimed by the person(s) that is entitled to the royalty within five years of the date that it has been allocated as Undocumented Royalty Distribution. The person(s) coming forward to claim the royalties needs to provide the adequate documentation to SAMRO as evidence of their claim. All royalties not claimed within three years will be added back to SAMRO’s Net Distributable Revenue for the following cycle of royalty payments.

Why should musicians become members of collective rights organisations such as SAMRO and CAPASSO?

Because the royalty is being paid out by the broadcaster on your work regardless of whether you’re a member or not. By being a member of the CMO (collective management organisation) the royalties accumulated will be distributed to you. If you’re not a member of the CMO, the unclaimed royalties will be added back to the revenue available for distribution to other members. 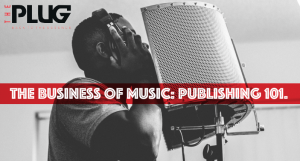 What are publishers and what do they do?

Copyright of a work is owned by the author of a work unless the rights are signed over to a publisher in writing. Publishers, were you to sign a publishing deal with them, administer your publishing with CMOs like SAMRO and CAPASSO, but more importantly, licenses synchronisation deals for the use of your music in things like adverts, films, documentaries etc. Publishers usually have the know-how to negotiate those deals for the artists and have the ‘muscle’ to act on the unauthorised use of your work.

With publishers, you generally have the option to outright sell your catalogue to a publisher and relinquish your ownership of your compositions or to license your work through them and split the revenue on it for a pre-negotiated percentage.

While the music business is predicated on artistic expression, it is still a business and needs to be negotiated with the prudence and care that any other business requires. We aim to empower artists and creators on these concepts to fully capitalise on their gift because as Jay Z infamously stated “I’m not a businessman; I’m a business, man.”

**With many thanks to Wiseman Ngubo of CAPASSO who gave generously of his time and resources to make this information available. 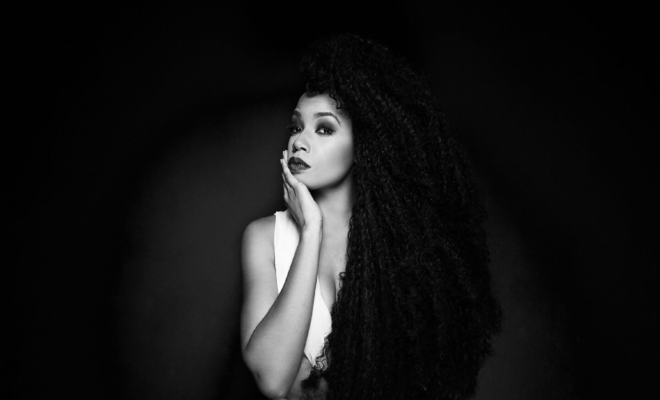